9.3 POR Score
Pros
Strongest motor in any consumer mixer, largest capacity and no motor on top to obstruct the bowl
Cons
Not as "pretty" as the candy gloss KitchenAid, not as common as competitor models
Summary
We believe (strongly I might add) that this is the far superior mixer to any competitors' models on the market. With the highest capacity bowl, lightest weight, strongest motor, most mechanically efficient attachment accessories, best ergonomic design (just tell me when you want me to stop!) .... I'll just go ahead and formalize my recommendation okay? Here goes ... yes, we would rate this a strong "BUY"!
Build Quality
Value/Price Point
Customer Satisfaction

A what now?! Is this not a pizza oven review site? Well, actually, it’s a WHOLE lot more than that. This website/blog is dedicated to virtually all things pizza-oriented. Our goal is to be the most “pizza-esque” diverse site on the internet. It’s impossible to have one site that has the most and always best information on every single related product or topic (that is literally impossible), but we are fairly sure we have the most pizza-related variety of content out there. That’s why this important pizza making tool is right here! The price is comparable to the competition (which is really only, well, okay, I’ll just say it ….. KITCHENAID!!! Okay? Satisfied?  It could be a tad more, but the price certainly would not be an issue here.  All the mixers are close enough in price to make other considerations more important.

You can see prices and a HUUUUGE amount of information HERE!

Is it Easy to Clean?

In less than 100 words …. YES! It’s smooth and almost feels “oily” to the touch, which means stuff just doesn’t stick to it, making it really easy to clean by hand, though it is dishwasher safe. 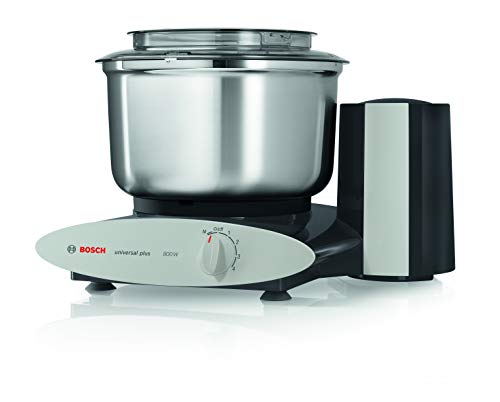 Not only do we own this machine, but it is actually a part of our daily lives! To say that we “tested” it, would be the understatement of the year around this house! Without this mixer, we would simply not do the things we do – they would be too difficult for our regular, daily routine (like mixing scads of dough!).

Of course, another understatement would be that this machine is powerful and does a whole lot more than mix dough! Oh, and talk about capacity! One user said she just made NINE, yes 9 loaves of bread at ONE mixing session! I suppose we could critique the size of her loaves, but you get the point! This machine has no equal using several comparison metrics. We own this machine! Some have said it is hard to clean…I don’t find that to be the case. Once I’m done using it, it goes into the sink and I fill it up with hot soapy water. After soaking for a couple of minutes it simply needs a little scrub and rinse and it’s done. Same with the splash guard and lid.

I have my Bosch sitting in the same place all the time and have only found that it “walked” the first time when I accidentally put it down on some flour. Once the surface was clean, it never “walked” again.

It’s excellent at kneading dough. I turn out a lot of pizza and bread on a weekly basis and this machine is still as powerful as the first day I used it…nearly 12 years ago.

It’s about as loud as any other mixer on the market.

For large batches where I want to make enough pizza dough for 8 or 10 pizzas, it has no problem mixing.

For large batches of bread where I’m making 4 large loaves, no problem.

Looks the same as the day we received it. Dad has put his through the dishwasher so the metal is not as shiny anymore – otherwise, his is still going strong after 25 years of use.

We have the dough hooks, the cookie whisks, and the blender… blender is excellent for making smoothies – powerful motor blends everything super smooth.

The KitchenAid dough mixer is nowhere near as efficient, and the dough hook doesn’t even mix near the edge of the bowl (oops, did I just use the name of a competitor?  Am I allowed to do that?).

Is there any doubt? Just go and buy the thing if you spend any time at all in the kitchen doing anything other than opening pre-packed, frozen entrees! It’s definitely the “best in class” machine out there. In case you still have doubts, you MUST watch this before making your final choice!