If you’ve spent any time in the kitchen making savory meals (ie. Pizza!), you’ll be quite familiar with the annoying problem of making a wonderful, culinary, masterpiece three-cheese and bacon/pepperoni pie, only to have it stick to your pizza peel tighter than Krazy Glue on plastic!

Once that happens, the process of getting it unglued from the peel often destroys the crust and makes for a very sub-standard pizza which falls way short of your expectations!

Some “chefs” believe that a well-floured wood peel is best to prevent sticking, but that doesn’t work well with super thin-crust pies with lots of toppings!  The entire piece of food art will self-destruct if you try to slide that creation off a thick, wooden peel onto your stone.

On the other hand, a thin, metal peel is often way stickier than any wooden peel, so what can you do?? Sticky dough can cause major problems when you try to move your pizza from your peel to your stone in the oven!

There are dozens of factors that dictate the “sticky-ness” of your dough, and I’m not about to go into all of them at this moment, but a few more common ones are:

You know that I know that you know there’s a solution for sticky pizzas on peels, but in this age of information online, you can get bogged down with lots of unhelpful info and you can get sidetracked or distracted with lots of other stuff, so you never really find the best answer to your initial search query.

Well, our research team (most of whom are pizza pros … or should I say “pros”?), has come up with some (mostly) sure-fire ways to keep your pizza and peel at odds with each other so they don’t get too cozy!

Here’s an overview of our absolute best options to make for an easy slide from your peel to your stone in the oven!

1.  Dust your peel (metal or wood) with flour and spread it around so there are no piles or heavier sections.  I use 50% flour and 50% cornmeal OR semolina.  I’ve also found that rice flour works well on a peel to reduce sticking.  If you use 100% flour, it may tend to burn and add an undesirable flavor to your pie.

Cornmeal is grittier (coarser grains) and adds extra space between the dough and peel but can alter the texture (and some say – taste) of the pizza.

Many people swear by semolina flour (coarse, harder grains left behind after the milling of durum wheat) since it is also similar to cornmeal in texture but adds very little flavor, or perhaps even a good flavor to the pizza.

2.  One of our researchers swears by this one!  Try stretching your dough and working with it on a floured silicone mat or floured countertop.  THEN, transfer it to your peel and DO NOT stretch the dough on the peel itself.

3.  I touched on some of the issues with both wood and aluminum peels, but as far as the issue of sticking goes, wood is the best choice.  Wood is more porous than metal and offers a much poorer “seal”.  Try using a suction cup on a sheet of glass and then try using it on your floured, wooden peel and see which one allows for a better “stick”!!

Also, condensation can form under a metal peel (especially if it gets a bit warm) and that just makes things gooey, sticky and messy!

4.  WORK QUICKLY!  Probably the single biggest problem that causes your pie to stick to your peel (even if you dump a huge load of flour on it) is TIME!

The longer the dough sits on the floured peel, the more time it has to absorb the flour and make it wet or at least ineffective.  We strongly suggest 60-90 seconds as your target time to spread the sauce and add all your toppings before moving on!

To this end, we also suggest you have all your toppings sitting a few inches beside your peel so you don’t spend extra time preparing the toppings while your dough forms an unbreakable bond with your pizza peel!

5.  Use the “shake” technique!  After each topping, do a (very quick) shake back and forth so the whole pie shifts on the peel.  The only catch here is that each shake should only take 1 or 2 seconds since time is of the essence!

6.  This one can be a little bothersome, but it works!  Before you make a 14-inch or bigger pizza, practice with a 10-inch or smaller circle of dough.  Use all the techniques we mentioned but also consider the moisture content of the dough (if you’re making the dough from scratch).  The drier the dough, the less it will stick!

7. We LOVE this one!  On occasion, we sprinkle sesame seeds (when we have them) to maximize the separation of peel and dough!  This also happens to enhance flavor and texture!  It’s a win/win!

8.  Parchment paper between the dough and the peel is a virtual foolproof method!  Make your pizza on the parchment (which is already on the peel).

We like PaperChef brand because it’s biodegradable vegetable parchment, it’s kosher certified, it’s rated at the highest normal “official” heat rating, and it has a good measure of eucalyptus fiber just to make it more organic-sounding and wholesome!

9.  If you’re getting desperate, this one will work.  Use a Pizza Screen (easily available anywhere online like Amazon).  Often pizza won’t stick too well on the screen, but a light coating of olive oil (I use olive oil spray) will make sure it doesn’t stick.  And, just to be on the gourmet side of things, I like to sprinkle a bit of cornmeal on olive oil – makes me look like I really know what I’m doing!

10.  If ALL ELSE FAILS and you’re getting frustrated and desperate, we have one last suggestion that is 100% foolproof!  Use and EXO non-stick Super Peel!  It’s not a peel in any sort of traditional sense, but rather, a piece of cloth wrapped around a wood board. 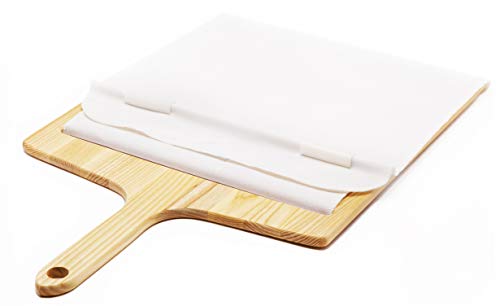 The cloth basically rotates around the wood like a conveyor belt and it can deposit its contents intact onto a pizza stone or anything else.  It’s excellent for pastries as well.  The cloth should be lightly floured for optimal performance.  It’s not a cheap option, nor is it a maintenance-free option (cloth needs to be laundered occasionally) but it’s probably the most effective option on our list!

What’s the Deal with Parchment Paper?

There’s some discussion in the world of pizza-making about the safety of using parchment paper at high temps.  Who wants to put out a fire in their oven right?

Parchment paper is not exactly fireproof and if you really want to, you can get it to burn to prove the point.  However, it is treated with silicone which makes it able to withstand very high temperatures.  I’ve made at least 100 pizzas in my Wolf gas oven which fires up to 500˚F and even dollar store parchment paper only turns darker brown around the edges.

Then, even if that paper is re-used for multiple pizzas, it just starts to fall apart – it never ignites.  I’ve never had any trace of flame on the paper, so for me (oooh, the big risk-taker!) that’s good enough to eliminate the possibility of me staying up at night worrying about burning down my house with parchment paper in the oven! 🙂

By the way, for what it’s worth, I keep my paper in the oven for about 60 seconds at 500˚F before pulling it out (sometimes with my bare hand and it’s not even that hot).  I re-use most of my sheets about 3-5 times after which the darkened edges start to disintegrate.  The heat does turn it dark (not the part under the pizza – just the edges) but it does not ignite.

Disclaimer:  Keep in mind that nearly all brands of parchment paper will stay they are oven safe to 425˚F.  That’s a good, safe temperature to put out there publically, but just like most products, the recommended limit is way below the actual tolerance.  Ever run your car down to the “empty” line on your gauge?  Did your car stop immediately?

Carmakers make sure you don’t run out of gas at that point – there’s always a safety built-in so you actually do have more gas to get you to a station.  I’m not telling you to push the limits officially, but you can read between the lines … wink, wink!

Check out the video below for details!

I have lots of ideas, but you may wonder what does the author use?  That’ll really tell the true story of what I believe right?

Well, you’re right – kind of!  If I had all the resources I wanted (ie. “if I were rich!”) I would get the EXO Super Peel and a variety of super-thin, beveled wood peels (which I would have custom made!).  In the real world, I own THIS 14” x 16” aluminum peel, and I use parchment paper which works every time!

I also have a whole lot more to say about pizza peels, so if you’re in the mood to learn more (who isn’t right? …. RIGHT???!) check this out!

How To Keep Pizza From Sticking to the Peel – 10 Tips That Actually Work! was last modified: April 28th, 2020 by Pete