We’ve been hearing this question a lot as of late; What’s the best pizza oven temperature?  It’s a fair question. In fact, I’ll be brutally honest here and tell you that as a pizza nut, I make pizza here at home in a variety of ways, and we do have a pizza oven, but it’s not an outdoor wood-fired one. Because ours is an outdoor propane model, we don’t usually deal with issues of temperature since it’s not so variable or hard to control as a wood-fired oven. I’ve done quite a bit of research to help answer this question, so here we go!

First off, it’s not as helpful to simply tell you a temperature in degrees, as it is to let you know a bit about how an actual pizza oven works in theory. That will help you understand the various temperature settings used in different pizza baking scenarios.  Ideally, however, you’d be fine if you could get your oven to around 700 – 800 degrees Fahrenheit.

If you’re thinking about using your indoor range (regular) oven to make pizza, check out this very helpful article on how to set the absolute best temperature when using a regular oven instead of a dedicated pizza oven.

The general theory of how an authentic pizza oven works is that a fire inside a dome or hearth area of an oven will heat the entire dome (usually made of firebrick or other heat-retaining ceramic material).

The entire inside surface of the oven will remain hot for a long time. However, in order to attain a certain temperature, ovens (particularly wood-fired), need to be lit hours in advance. The larger the oven, the more wood, and fire is needed, and for a longer period of time. It’s tough to tell you exactly what to do at this point because there are many variables that affect the final time necessary to arrive at your optimal temperature.

For example, do you want your oven at 300 degrees or 900 degrees? Is your oven large or small? Are you using hardwood or softwood? Is your wood super dry or a bit moist? (find out more details on wood HERE) Is it cold and windy outside or super hot and dry? Will they squeeze one more season of 24 from Kiefer Sutherland or not? Okay, forget that last one! It’s best to experiment with some variables (mostly with fuel and time as it relates to the size of your oven and your cooking technique).

Once you start the fire, you’ll want to build it to the desired temperature (confirm with a laser thermometer so you’re at a safe distance from the searing heat), the idea is to seal the door shut in order to accomplish two things; First, you’ll want to lessen the fire itself since you’ve already reached your temperature level, and you’ll want to allow the heat to move around the entire interior oven chamber evenly and efficiently.

After a short while, you can remove the door and be sure to move the wood (hopefully still flaming at least a bit) and coal/embers to the side so you can place the pizza towards the opposite side.

Get to the Point Already!

Okay, okay, what’s the best pizza oven temperature already right? Fine, Fine, keep it together, it’s coming! You’ll get lots of different results with lots of different sized pizzas. I’ll cut to the chase and give you a really basic scenario and then expand a bit to give you a better idea of this whole mystery.

A typical pizza peel (the long-handled wood or aluminum thingie you use to insert and remove the pizza itself) is often used as the surface on which you actually create the pie itself. That means it’s not super huge and your dough is typically not deep dish.

It’s usually thin crust. So, if you put a thin crust pizza in a typical wood-fired pizza oven, and the pizza is about the size of a medium or large sized peel, then a great scenario is to have the oven at around 600 – 700 degrees Fahrenheit and the pizza will be very crisp and totally ready to eat in about 2 minutes. 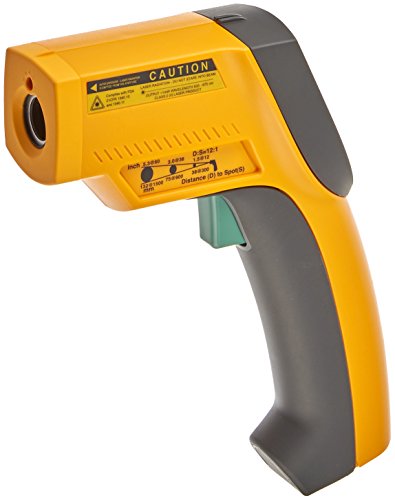 Here’s the Fluke 63 Handheld Infrared Thermometer for your pizza oven. You can get cheaper (and a whole lot more expensive too) but they just won’t be accurate. I know because I bought one for $25 and it really – REALLY does not work (though it looks good)

That is, of course, a generalization and you’ll have to experiment. We write a lot more about the entire process of baking from start to finish in this article. Another good rule of thumb (almost the same as the last scenario) which I think is a great guide is that the optimal temperature for a really crispy pizza is to fire the oven to 800 degrees Fahrenheit and your thin crust pizza is done in 90 seconds.

To contrast that, you can cook a pizza at 300-400 degrees (typical of indoor pizza oven models), but it’ll take potentially 15 minutes and the crust will not be as super crispy.  To confuse the issue further, consider that the “perfect temperature” depends on what’s for dinner.  Check out this article to find out what temperatures are best for what!

While I want to give you a specific temperature, here’s why it’s so tough; One famous chef has stated that his pizza oven runs at about 500 degrees, and his pizza is done in 2 minutes, while another has a YouTube video telling us his oven is at 800 degrees and his pizza is done in about 4-5 minutes. This is a HUGE difference in factors and both pizzas looked about the same size and were done to about the same degree.

One final thought or tip related to heat; since a typical pizza is fully baked and ready to eat 90-120 seconds after you put it into a hot oven, it’s sometimes helpful to shield the pie from the direct flame with the body of the peel. It’s true that most properly made ovens distribute the heat very well, but it’s also true that sometimes the flame and coal is still a hotter source of heat coming from one side of the oven, and it bakes the pizza faster on the side closest to the fuel/flame.

That’s why shielding it with the peel can help keep that side from burning while the far side of the pizza catches up!

So there you have it – a big pile of confusion! Well, it’s at least a start to coming up with your own perfect pizza oven temperature!