Let’s get one thing abundantly clear right off the top!  College students and pizza are kinda like Anthony and Cleopatra (remember, from history class?).  It’s a love affair that, if not tended to carefully, can end in tragedy over the long haul!  What I mean specifically, is that students are notorious for eating trash food for the long term (ie. mac and cheese, packaged, frozen, canned, boxed, dehydrated and extra, super, ultra-processed foods).

These foods don’t always affect them negatively over the short term since their bodies are operating at near-optimal conditions during those years, so it’s easy to get sloppy with what they eat.  If you’re one of these, I’m talkin’ to YOU!  Here’s my soapbox:  Just be careful with eating crap food (I can tell you some stories that will make you think!).

However, I don’t expect you to just eat spinach and garbanzo beans (though you’d probably be better for it!).  No!  I love pizza, and I think it can be a part of a greater diet that not only isn’t bad for you, but can offer you a decent level of nutrition (especially if you use whole wheat flour from ancient grains – thus, no GMO flour, and organic vegetables, etc.).

So, you’re getting ready to head off to college, and you’re wondering about what types of amenities you’ll have in your dorm room or off-campus apartment.

If you’re lucky enough to have an apartment that comes with an oven, and you’re only looking to basically nourish your body while at school, then you’re probably good to go with the included range and oven.

However, if you happen to not have access (or not exclusive access) to an oven, or you’re a bit more particular about your pizzas (as you would be if you’d had real, wood fire Neapolitan pies before), you may want to consider a more appropriate option for making awesome pizzas – and NO, I’m not talking about a toaster oven.  A toaster oven is fine, but it’s not going to get to the right high temps for an authentic pizza.  It’s only good for re-heating store-bought cardboar…oops, sorry, “store-bought pizza!”.

WE LOVE this Non-GMO Flour!

The LeFarine flour is an imported Italian soft wheat flour (“00”) which is perfect for pizza, pasta and general baking.  Best of all, it’s n0n-GMO, unbleached and all-natural … and all-purpose!  What more do you need! 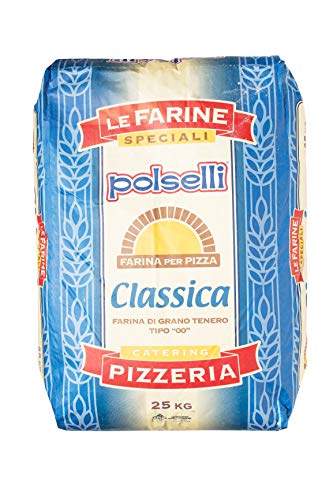 Some of our choices are not so much better than that, but we take all things into consideration, like price, quality, and value too!  With that in mind, let’s explore some of the better options for a small, portable, inexpensive and very appropriate pizza-making (and other stuff) option for the aspiring youth headed off to a stellar academic institution to begin real life!

All of our pizza ovens for college students are ovens that are made for pizzas (though some are better meant for heating frozen pizzas), and we assume they’ll be used totally indoors, with no option for a balcony or deck.  That leaves us with mostly electric models and disqualifies propane or wood-fired models.

This little device makes our list because it is just simply CHEAP!  Well, I mean, it’s inexpensive (under $25 as I write this) and it’s pretty versatile.  It does make pizza from scratch but bear in mind that it’s quite small.  The inside diameter of the cooking surface is only 10″, so you’ll have to adjust your expectations and your pizza sizes accordingly.

It has a Teflon coating to ensure easy cleaning, and customers who use this regularly are generally quite happy with it.  Usually, it takes a bad experience to make someone write a personal review about a product, but not so with the Everyday Baker.  It does a decent job at a really great price.  Don’t expect it to make gourmet, wood-fired style pizza, but you’ll be surprised what it can do in once you use it with the price/value in mind. 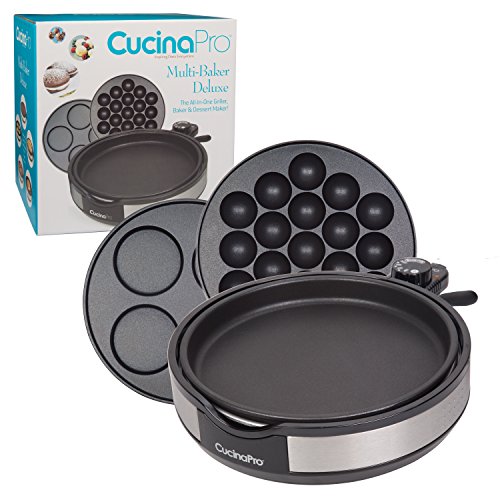 Also sliding into the picture with a very palatable price point and a “retro-future” look (if that makes sense), is the Pizza Perfector.  It boasts the ability to do store-bought or original dough pizzas.   It has a rotating tray and both upper and lower heating elements to ensure proper cooking.  The automatic timer ensures no forgotten food left to burn.  The 12″ pizza size is bigger than the CucinaPro, so it may suit some users better. 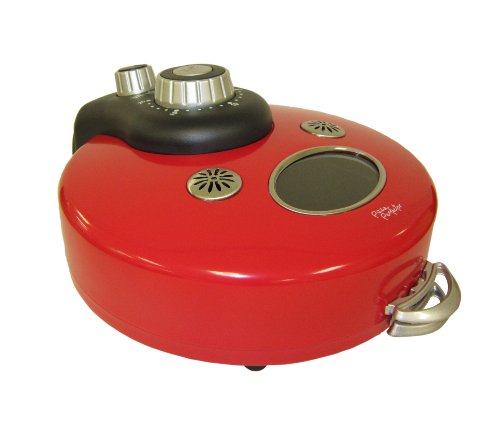 I really like this one, and one of the reasons is a superficial one;  the cool look.  This actually looks like a box, but I love the simplicity.  It gets up to 525˚F and has upper and lower heating elements with a rotating interior tray.  Like most ovens in this category of super-portable, sub-$75 price range, there are a portion of users who give it a zero or 1 star, based on damage during shipping, or some weird anomaly like smoking and self-destructing on the first usage.  However, most users are thrilled! 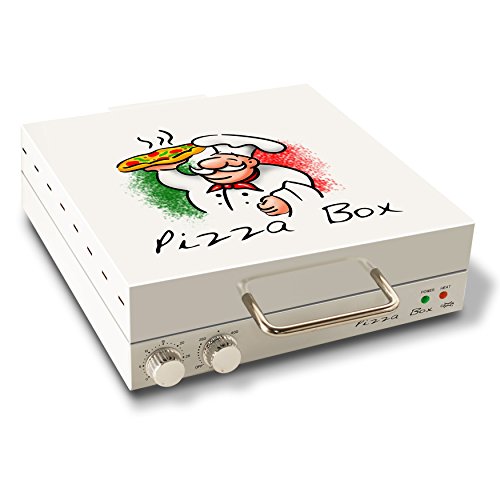 This one is once again, right in there with the last 3 ovens.  It makes a 12″ pizza and it has a rotating interior as well as a similar design (top and bottom portions that close like a clamshell).  It also appears that it has just as many positive and negative comments as all the other ovens.  In this category, it looks like your choice could probably be based on factors such as availability, looks, and price, rather than all the variety of features.  The features are similar and common to several models.  Having said that, this one has a window on top to let you spy on your grub. 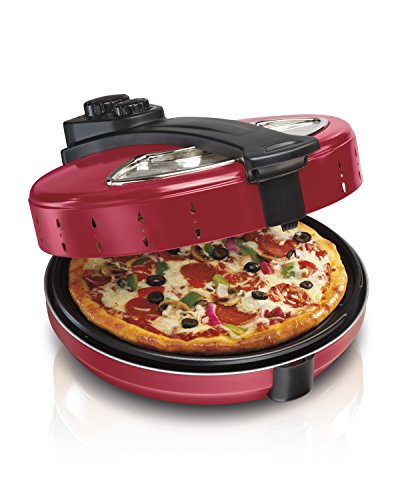 This little cooker is probably the most unique option.  While being very affordable, it is also one of the lightest models in this space.  It rotates the pizza or tray of food and has upper and lower heating elements.  However, your food enters and exits the area of the upper element.  It has an open burner which could be a problem with little kids.  Some reviewers were unhappy about the fact it did not last long.  That seemed to be the big complaint among the 1-star reviewers, rather than some issue of how it functions. 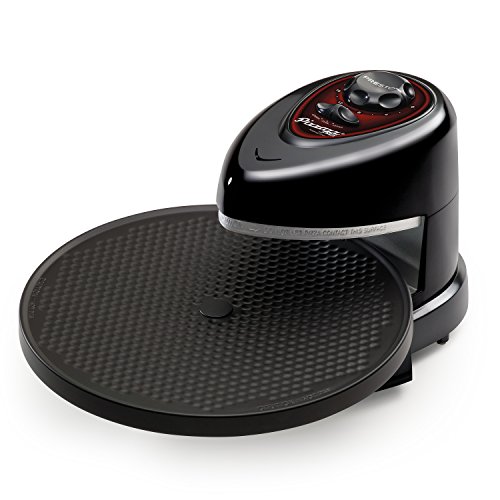 Can’t beat this price!  It’s about half the price of the last couple ovens above, so if it lasts a year of heavy use (or heck, even a semester), it’s not bad.  It’s priced less than TWO trips to McDonald’s.  Enough Said! 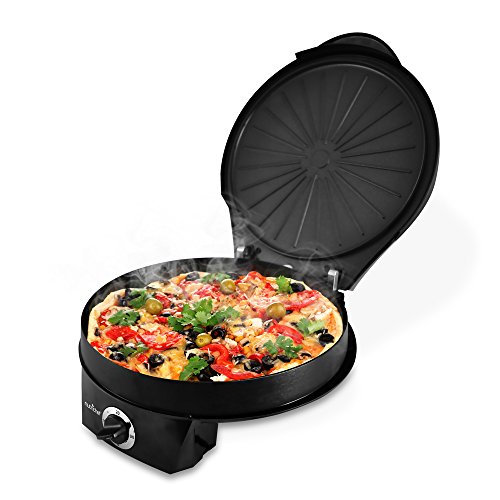 At less than $50 we’re excited about the Courant!  It revs up to 1440 Watts of power and it’s meant for WAY more than just pizzas!  It includes a ceramic refractory stone and a wood peel.  With its non-stick coating, it’s designed to make you quesadillas, nachos, mini frittatas, quiche, croissants, giant cookies, hors d’oeuvres Mini Pizzas, S’mores Pie, Cinnamon Buns, Chocolate Chip Cookie, Cheese Nachos, Party Mix, Omelets and much more.  I’m sold on it! 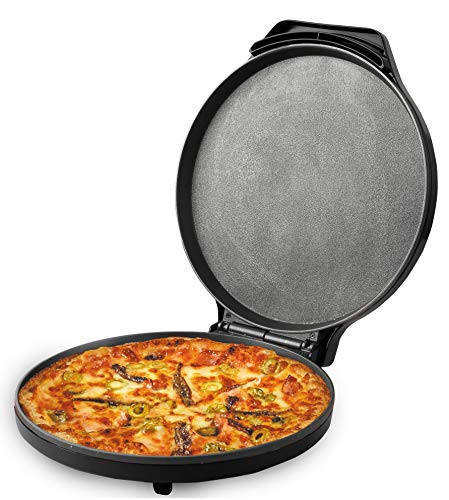 This oven looks great and offers you more for the money.  It has two cooking areas, and as the name states, it has a dedicated pizza drawer.   With its convection technology and excellent overall feedback from owners, makes this a good deal.  The one thing we were a bit concerned with is the lack of feedback concerning fresh dough pizza.  It looks like this one is more suited to frozen pies, but it’s also more versatile than some of the other clam-shell style models for overall baking, heating, cooking that a typical student might experience. 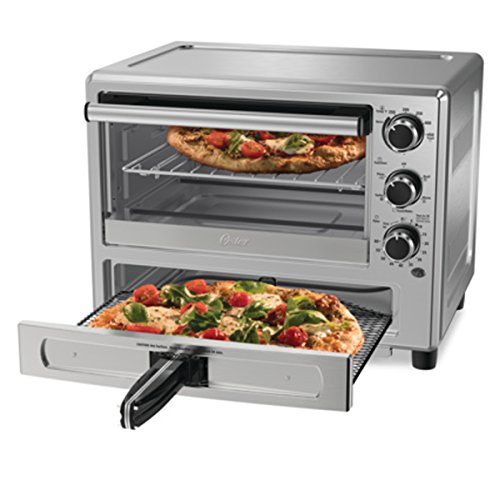 We like the quality of the Wisco brand (made in Wisconsin instead of a sweatshop in Guangdong province).  We also like the fact that at the 450˚F temperature, you’re good to bake fresh dough pies rather than just be relegated to heating frozen pizzas.  It’s a versatile tool in any student’s dorm room, and very reasonably priced (less than a good pair of basketball shoes). 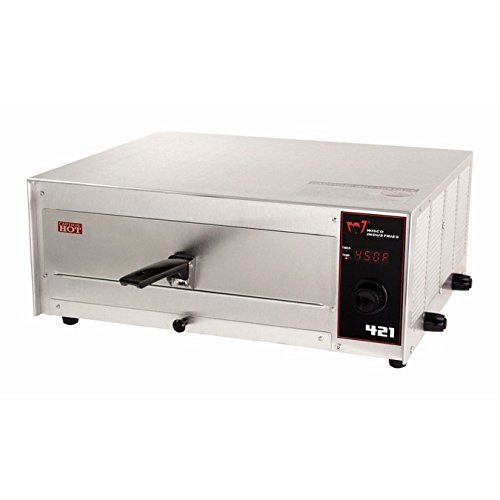 Okay, this one’s a bit of a wildcard.  It underperforms on some counts, and on other counts, it blows away the competition by miles!  We chose it as our number one because it REALLY is the best choice for an indoor PIZZA OVEN!  It gets up over 600˚F which is at least 150˚F hotter than most of its indoor competitors.  It actually makes something authentic-ish!  It’s also crazy portable and inexpensive.  On the other hand, it does lack in versatility.

It’s not great for re-heating everything, and it’s tough to finesse the temperature like you can in a toaster oven.  One of the biggest downers of this option is that it can’t be used with an electric oven, which, I assume is what most college students would have access to, if they have any oven/stove at all!  If you’re a pizza lover AND have access to a gas range, this one’s a must! 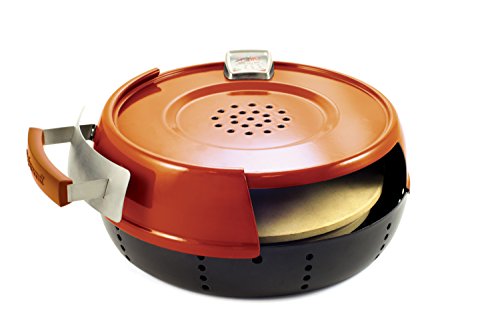